Wind Mitigation Survey: An evaluation to determine how the home/structure will withstand a wind-related event. The evaluation may reduce your insurance premium.

Roof Certifications: An evaluation of the roof to determine the condition and expected remaining life of the roof coverings.

4-Point Survey: Some or most insurance companies require 4-Point inspection reports for certain homes, depending on their criteria. This inspection is for the insurance company to determine if the home qualifies for insurance through their company. Some updates may need to be done prior to them issuing homeowner insurance.

Most people think that since it’s new, an inspection is not necessary. What some people don’t realize, there are mistakes made which go undetected. Some construction contractors do a great job and mistakes are just that. Some do a poor job and take shortcuts. Although there are local building official inspections, their time at the sites are limited to just a few minutes due to their overwhelming work load. These are just a few reasons why an independent inspection working for you is important.

The most common inspections done are pre-slab, lintel, rough-in and final. Sometimes oue inspections are done before the local building official inspections and sometimes after, depending on the timeline which is usually a small window as the construction continues.

Here are just a few examples of mistakes made, most go undetected unless found before construction continues. Remember, the structural building plans that are on-site describes every detail of how the home is to be built and what anchors, nails, hurricane straps are to be used and where. You get the idea.

Pre-slab is the footer inspection: The actual layout, footer size and depth, steel rebar and dowel locations. Typical problems consist of missing or improper installation of the steel rebar and sometimes installed in the wrong places. Recently, I had one where the forms and steel was an inch off at the rear even though it was approved by the local building official. Might not seem like much but it would have been a major problem after the slab was poured. 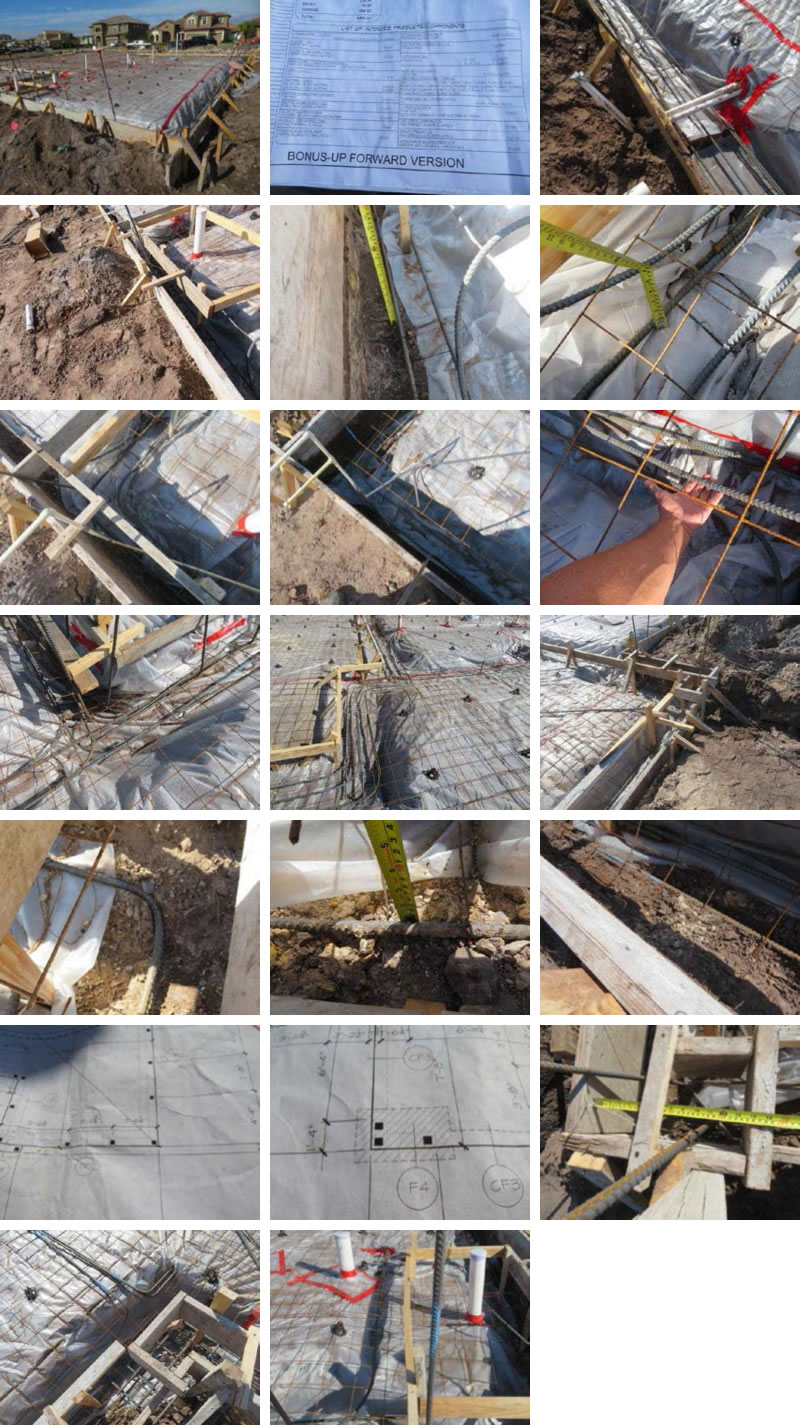 Lintel Inspection: Once the block walls are up, there should be steel rebar in the walls according to the engineering plans. All rebar should be tied to the footer rebar and at the top of the block perimeter (Lintel) and all tied together. Common finds are missing rebar and rebar not tied together. The final portion of the lintel inspection either requires another trip and sometimes done at the rough-in inspection phase. A large hammer is used to pound the block walls where concrete fills the block cells where rebar is present. Most of the time, some cells are missed or not fully filled with concrete, potentially a serious condition and a structural defect. 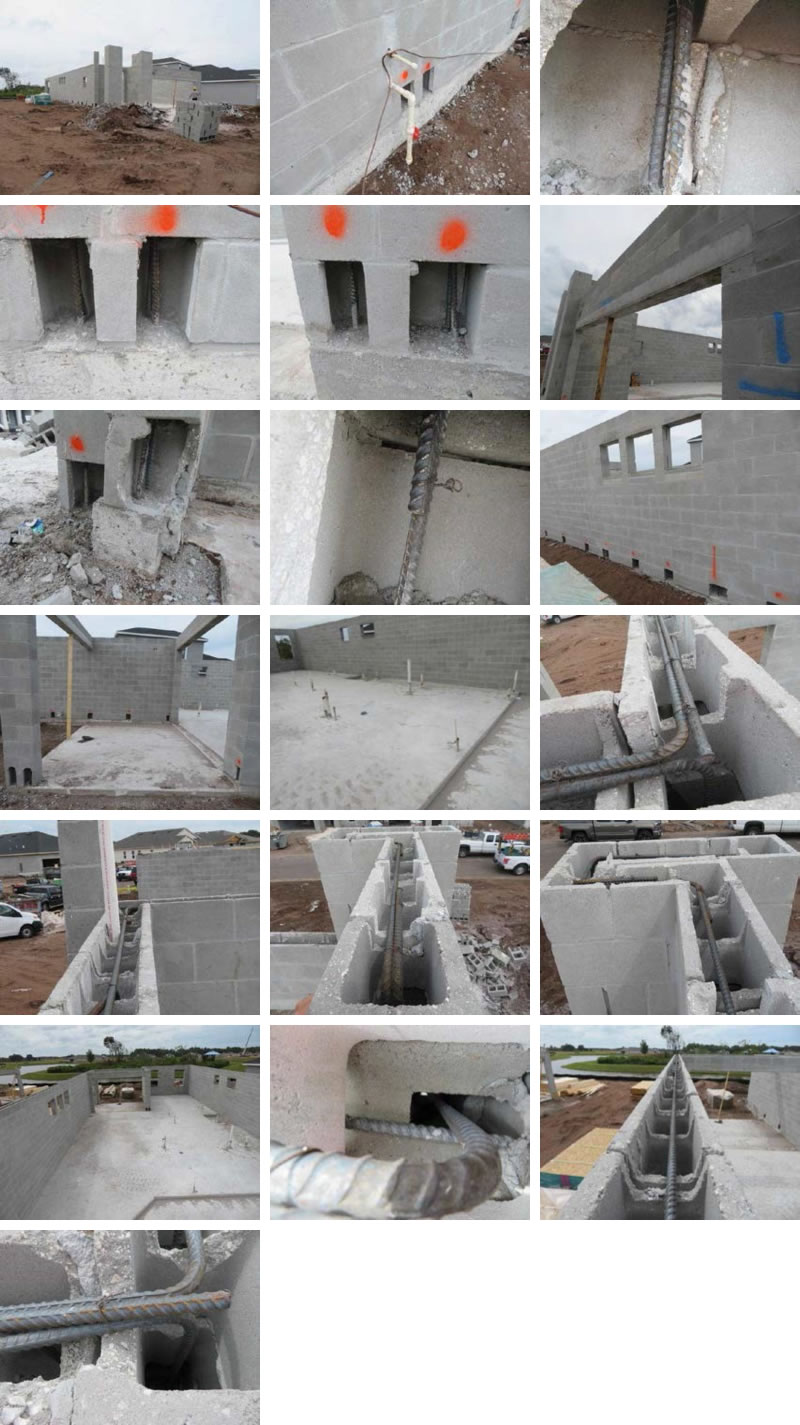 Rough-in Inspection: Probably the single-most important inspection that should not be omitted as everything is open to view before the insulation and drywall is installed. All framing, HVAC ducts, electrical, plumbing and roofing are all in place. This inspection is intense and takes 3, 4 or more hours on site, not counting the reporting. Some of the most common examples of defects at this stage are block cells not fully filled with concrete, the lintels not filled to the top edge of the block, hurricane straps improperly set in the lintel pour and improperly attached to the trusses, missing framing attachments, missing nails at attachments, improperly constructed stairs and the list can go on with the HVAC, plumbing and electrical components as well. The attached photos are examples of mistakes. 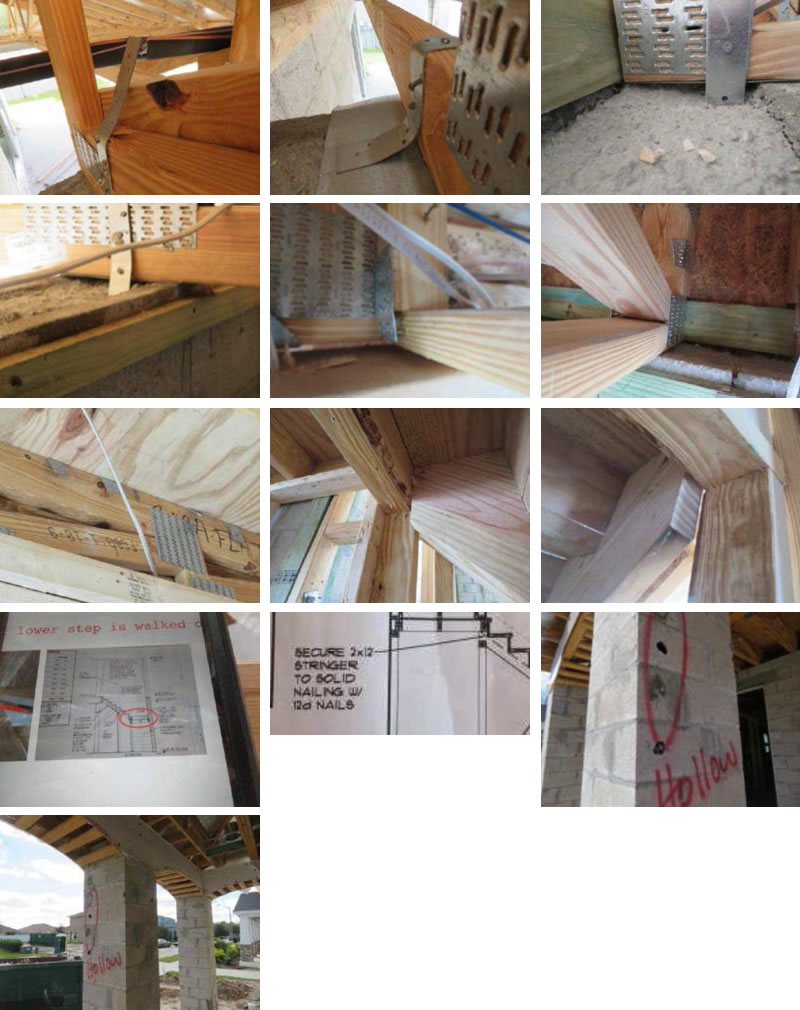 Final Inspection: The final inspection is very much like an existing home inspection but maybe more critical on cosmetic items since it is new.

Goal: The purposes of the inspections are to make the building supervisor aware of defects so repairs can be made since they are not really supervising their work. Their main focus is to schedule the trades and make sure things get done. Each trade sends in someone to check for quality and to make repairs. Unfortunately, some do little in identifying defects.

Repairs: Once the report is generated with plenty of photos, it is provided to the building supervisor for repairs. It is rare that a builder will complain about anything documented. Most of the time, they want a well built home as they want happy homeowners.

If you have a concern with a particular surface or component and need further evaluation, we may be able to evaluate to determine what the problem is and what will need to be done to correct the problem(s).

A popular inspection is a warranty inspection. Typically, builders provide a 1 or 2 year warranty for a new home. Prior to the expiration of the warranty, a full home inspection can be done for you to provide to the builder for items that need repairs. (Structural components may fall into the 10 years structural warranty).